Katharine Harvey recently caught up with celebrated Canadian structural engineer and photographer, Morden Yolles, at the Nicholas Metivier Gallery to discuss her current exhibition Blueprint and her large-scale public art commission for Great Gulf's new residential building at 25 Richmond Street East. Harvey was a personal assistant for Yolles from 1996 to 2010, and they remain close friends.

M: Your show at Metivier is just beautiful, it's terrific. Where do the titles for the works come from, and how do you create the interesting surfaces of the paintings?

K: The titles refer to the blueprints I researched for my public art commission at 25 Richmond Street East and to the shapes and colours I use. For many years, I have used an acrylic gel medium that I layer up to 25 times to achieve a glass-like effect. The painted shapes and lines float in between and on top of the transparent acrylic gel medium layers. They separate the colours and make them much brighter and the surfaces three-dimensional and tactile. With the Great Gulf project, I was able to translate these gel layers I have developed over a long period of time, onto glass panes and separate them four inches apart. I created the glass design first and then made the paintings afterwards based on the experiments with the glass.

M: What is your fascination with colour?

K: It's a hard thing to answer; it's part of my signature, these multicolours. It came to the forefront for me seeing the first digital images. The computer screen broke images down into pixels which are tiny dots of colour placed beside each other to create a larger area of colour. I love how jpegs dissolve into pixels, and how each pixel can be translated into a dab of paint. In this way, so-called high technology inspires the low technology of paint.

M: I want to talk about your interest in old buildings and new buildings. With respect to the new buildings, how did Great Gulf come to contact you?

K: Alan Vihant, Senior Vice President of High Rise at Great Gulf, previously worked for Concord Adex and knew of my public installation, Gardiner Streams, that was commissioned for one of their buildings completed in 2015. Alan oversaw the selection of the public art feature for Great Gulf’s new site at 25 Richmond Street East. He was also aware of my painting practice through Metivier Gallery.

M: Can we talk about blueprints now?

K: I went to the City of Toronto Archives four years ago at the start of the commission. Of course, it’s closed now because of the Covid-19 lockdown, but I want to go back there to get more blueprints of other historic buildings downtown. The blueprints I used for the commission and this exhibition are from Shea’s Victoria Theatre, the previous building that stood on the site from 1910 to 1956. I had the blueprints reproduced for my research purposes, and they’re just gorgeous.

M: How are they reproduced?

K: The Toronto Archives photographed the files and printed them life-size for me, for a fee. You can see the interior designer’s name written on them, Lempert & Son Architects from Rochester, NY.

M: What this your first experience with blueprints?

K: No, because I worked as an assistant on your book about the 50-year history of Yolles Structural Engineering! I got to research a lot of Roly Bergman’s sketches which appear on the title pages of the book. I loved them; they were all delicate, original pencil drawings. Blueprints were developed before photocopies or anything like that, but they could still be reproduced. 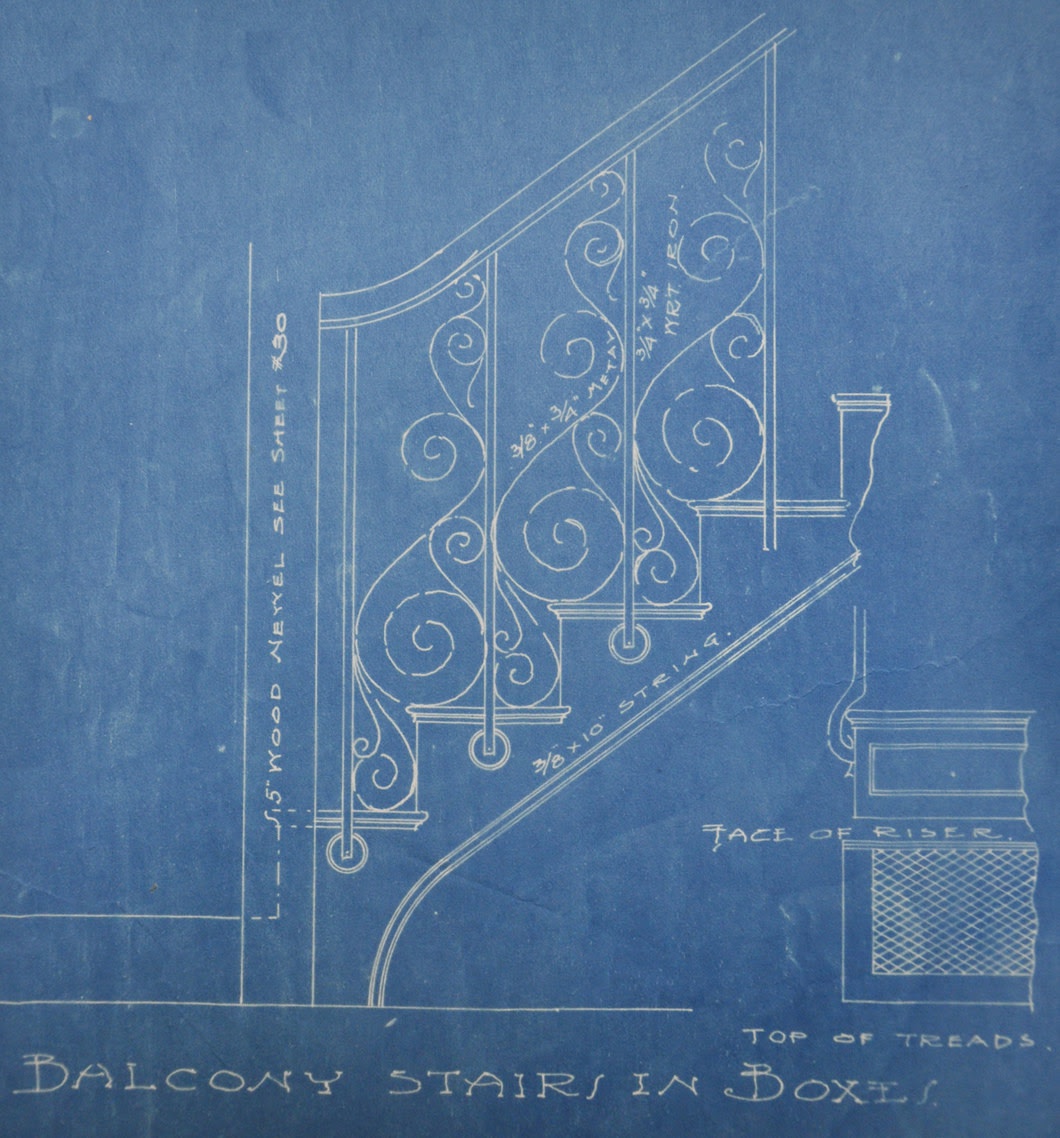 M: Shea’s Victoria is part of the titles of many of the paintings in your show. You came across Shea’s Victoria when Great Gulf commissioned you, and you did not know about it before?

K: No, I didn’t. ERA Architects did a heritage assessment of the site which they gave to me. I started looking into that history and Shea’s Victoria, a Vaudeville theatre, was on that site previously. It was in the Beaux-Arts style, which is very frilly and ornate. This style appealed to me because I’m drawn to pattern and design. I started looking at the blueprints and then enlarged them and starting riffing with colour. The theatre was torn down in 1956, and the site was used as a parking lot until 2018.

M: Why did you choose these particular blueprints?

K: They featured a motif that is found in many Beaux-Arts buildings. It is a harp surrounded by a wreath of laurels, which can be traced back to Greek mythology.

M: Where was the blueprint from on the building exactly?

K: This motif was on the art glass above the ticket wicket. It also appeared inside the building on the balcony patterns. You can find the same motif at the entrance of the Elgin Winter Gardens Theatre on Yonge Street which has been fully restored. I thought it would work well for my design for 25 Richmond East if I repeated these lines within circles several times. I played around with the various motifs in sketches and then met with Alan Vihant and his Great Gulf team, and they would give me feedback. Metivier Gallery also weighed in on the drawings, so it was a collaborative process for several months.

The main art feature window on Richmond will be 8 feet high by 34 feet wide. It’s three panes of glass, set four inches apart. My design repeats and the idea is that the lines will coalesce and break apart as you drive, walk or bike by, and the image will appear to be in motion. I am also referring to the first moving pictures which were shown in the theatre when it was converted to a cinema in the 1930s.

M: What level is the glass on the building?

K: It’s on the street, facing the sidewalk on the south side of Richmond Street East. It will have safety glass in front of it and will be backlit with LED panels, like a huge lightbox.

There are two other window components for the same project. One is an 8 x 10-foot window facing an east/west pedestrian mews to Victoria Street, and the other is three poster-sized lightboxes for an interior north/south passageway. Both are accessible to the public.

The site is located in the ‘Old Town’ which is fascinating to me. It’s an area full of the history of Toronto, and there are a few historic buildings still standing.

M: Well, I am looking forward to seeing your work on the street.

K: Me too! I have been working on it for over four years!

M: It will be very unusual.

K: Yes, I hope so. I don’t think this kind of glass layering in depth has been done on this scale before. It is quite a complex project. By chance, Great Gulf hired Engineering Link to complete a thermal/condensation study on the window construction. The firm employs a lot of former Yolles engineers.

M: Is this the first time that you’ve worked on glass?

M: When is it going to be done?

K: Museumpros will start installing the glass in a week or two. You will be able to walk and see them working on it. Because the building is still under construction, the art glass might be protected and boarded up until occupancy starts in February 2021.